by adminPosted onMarch 12, 2010
The Grameen Bank is based on the voluntary formation of small groups of five people to provide mutual, morally binding group guarantees in lieu of the collateral required by conventional banks. At first only two members of a group are allowed to apply for a loan. Depending on their performance in repayment the next two borrowers can then apply and, subsequently, the fifth member as well.
The assumption is that if individual borrowers are given access to credit, they will be able to identify and engage in viable income-generating activities – simple processing such as paddy husking, lime-making, manufacturing such as pottery, weaving, and garment sewing, storage and marketing and transport services. Women were initially given equal access to the schemes, and proved not only reliable borrowers but astute enterpreneurs. As a result, they have raised their status, lessened their dependency on their husbands and improved their homes and the nutritional standards of their children. Today over 90 percent of borrowers are women. 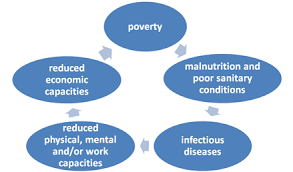 image of ” cycle of poverty “
Intensive discipline, supervision, and servicing characterize the operations of the Grameen Bank, which are carried out by “Bicycle bankers” in branch units with considerable delegated authority. The rigorous selection of borrowers and their projects by these bank workers, the powerful peer pressure exerted on these individuals by the groups, and the repayment scheme based on 50 weekly installments, contribute to operational viability to the rural banking system designed for the poor. Savings have also been encouraged. Under the scheme, there is provision for 5 percent of loans to be credited to a group find and Tk 5 is credited every week to the fund.
The success of this approach shows that a number of objections to lending to the poor can be overcome if careful supervision and management are provided. For example, it had earlier been thought that the poor would not be able to find renumerative occupations. In fact, Grameen borrowers have successfully done so. It was thought that the poor would not be able to repay; in fact, repayment rates reached 97 percent. It was thought that poor rural women in particular were not bankable; in fact, they accounted for 94 percent of borrowers in early 1992. It was also thought that the poor cannot save; in fact, group savings have proven as successful as group lending. It was thought that rural power structures would make sure that such a bank failed; but the Grameen Bank has been able to expand rapidly. Indeed, from fewer than 15,000 borrowers in 1980, the membership had grown to nearly 100,000 by mid-1984. By the end of 1998, the number of branches in operation was 1128, with 2.34 million members (2.24 million of them women) in 38,957 villages. There are 66,581 centres of groups, of which 33,126 are women. Group savings have reached 7,853 million taka (approximately USD 162 million), out of which 7300 million taka (approximately USD 152 million) are saved by women.
It is estimated that the average household income of Grameen Bank members is about 50 percent higher than the target group in the control village, and 25 percent higher than the target group non-members in Grameen Bank villages. The landless have benefited most, followed by marginal landowners. This has resulted in a sharp reduction in the number of Grameen Bank members living below the poverty line, 20 percent compared to 56 percent for comparable non-Grameen Bank members. There has also been a shift from agricultural wage labour (considered to be socially inferior) to self-employment in petty trading. Such a shift in occupational patterns has an indirect positive effect on the employment and wages of other agricultural waged labourers. What started as an innovative local initiative, “a small bubble of hope”, has thus grown to the point where it has made an impact on poverty alleviation at the national level “.
Rate this post